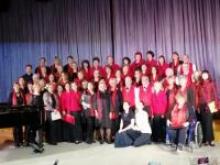 On October 4, Children's Music and Choir School held a festive evening in honor of the 30th anniversary of the twinning between Petrozavodsk and Tübingen.

The idea to have a joint choir performance emerged in 2018 during the preparation for the "Germany Days" in Petrozavodsk, dedicated to 30th Petrozavodsk and Tübingen twinning anniversary. For the past few years, different groups from Tübingen have been performing in Petrozavodsk. Organizing a choir performance, however, is not an easy task, since it requires substantial financial and organizational efforts. Nevertheless, the city of Tübingen accepted the offer and promised to find a choir to perform at Petrozavodsk. Karelian Resource Center of Non-governmental Organizations and Children's Music and Choir School, which housed the festive evening, were responsible for meeting the guests and arranging their stay. This is how "Prresto" choir from Tübingen and "Gloria" choir from Petrozavodsk met. Both choirs consist of non-professional singers - just people of different jobs, united by their love for music.

A magnificent solo performance of the songs of Russian composers by Albina Khuzina, choir director and conductor of Academic Female Choir "Gloria" of Educational Development Institute of Republic of Karelia, was a pleasant surprise for the audience.

Guests from Tübingen - "Prresto" choir - performed several songs of modern German and English composers, as well as a medley of popular works in different languages. German chorists announced their performances in Russian without a translator and received a warm welcome from the audience. This is the very first visit to a twin town for "Prresto", and the members of the choir said they really enjoy it.

The evening closed with two beautiful joint performances, which "Gloria" and "Prresto" prepared by themselves. First, two choirs preformed «Guten Abend…» by Johannes Brahms under conductor Brigit Gentner, and after that, Albina Khuzina conducted two-choirs perfomance of "We Praise Thee" by Dmitry Bortniansky. 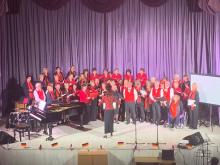