A collaborative evening with choirs from Petrozavodsk and Tübingen 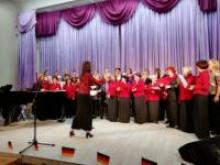 On October 3, as part of the celebration of the 30th anniversary of twinning between Petrozavodsk and Tübingen, Children's Music and Choir School hosted a collaborative evening of choral groups.

The evening opened with the performance of B.Okudzhava's "Grape Seed" by the teachers of the Children's Music and Choir School.

Academic Female Choir "Gloria" of Educational Development Institute of Republic of Karelia gave Russian and Soviet songs. Natalia Khuzina, the choir director, spoke about the forming of the choir and pointed out that its members - teachers of music and regular schools, kindergarten music teachers, medical workers and other employees - share the love for music.

Guests from Tübingen - "Prresto" Female Choir - performed gospel songs and songs of modern German composers. During her welcoming speech, Regina Brem, the choir's conductor, stressed that all members of "Prresto" are glad to visit Petrozavodsk. This is the first trip to a twin city for "Prresto". "Prresto" choir was formed in 2000. It's a part of one of the Tübingen's oldest choirs - "Weingärtner Liederkranz", which was founded in 1845 and wil celebrate its 175th anniversary in 2020.

The evening closed with the rehearsal of the joint performance from "Gloria" and "Prresto", which both groups prepared by themselves and which will be performed at the Festive Evening in honor of the 30th anniversary of the cooperation between Petrozavodsk and Tübingen at Children's Music and Choir School (Pervomaisky prospect, 4a) at 18:30.