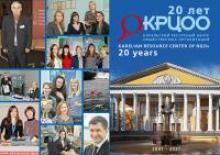 On November 26, partners, colleagues, and friends of the organization came to the Association's office to congratulate our small staff on the anniversary. In the welcome addresses from the Ministry of Economy and the Ministry of National and Regional Policy, which were read by the Deputy Minister Viktor Svirsky and the Head of the Department Irina Krutikova, expressed gratitude for the contribution made by the Association to international cooperation, harmonization of interethnic relations. Chairman of the Public Chamber of the Republic of Karelia Lyubov Kulakova noted the significant contribution of the KRC to the development of civil society. Natalia Apollonova, an aide to Senator Igor Zubarev, presented a congratulatory address, which emphasized the role of the KRC in publishing books on military-patriotic topics. Zhanna Maleeva, Head of the Public Relations Department of the Petrozavodsk Administration, on behalf of the Head of Petrozavodsk, Vladimir Lyubarsky, thanked for promoting the development of the non-profit sector and establishing a constructive dialogue between civil society, authorities and business.
Long-standing partners who participated in a number of joint projects were invited: Director of the Integrated Center for Social Services of the Population of the Republic of Karelia Elena Malysheva, with whom many social projects were implemented, as well as Director of the Institute of History, Political and Social Sciences of PetrSU Sergey Verigin, who participated in various military-patriotic projects. Natalia Lavrushina, General Director of the Karelian Foundation for the Development of Public Diplomacy, Alexey Pukhov, head of the trucking company, and Alexander Kolomytsev, director of the publishing house "Ostrova", who announced the release of the collection "National Battalion of the Karelian Front", noted 15 years of fruitful cooperation, recalled about joint projects, trips, books released.
Many kind words have been also spoken out from other participants of the anniversary: Vladimir Gusev, Head of the Department of the Ministry of Justice of the Russian Federation for the Republic of Karelia; Gennady Saraev, Commissioner for Children's Rights in the Republic of Karelia; Svetlana Rukavishnikova, Chairman of the Ukrainian Culture Society "Kalina"; Tatiana Galkina, teacher-organizer of the museum activities of the Derzhavinsky Lyceum; Tatiana Klekacheva, representative of the Swedish-Karelian Information Business Center; Dmitry Bobrov, project manager of the Social Tourism Development Center. The Association was glad to see those who started their career within the walls of the KRC: Anastasia Romanova, Anastasia Vorobyova, Elena Kharcheva, Kirill Fitisov, Alina Gordyushkina. Congratulations were also read out from the Lawyers for Civil Society Association (Moscow) and from partners from Denmark.
Indeed, a lot has been accomplished over the years.
- A system of relations with state authorities, local self-government, business, NGOs has been developed both in Karelia and in other regions of the Russian Federation and abroad.
- Attracted almost 200 million rubles of investments in the social sphere of the Republic of Karelia.
- Dozens of employees, trainees have passed the school of work in public organizations, which will undoubtedly help them in working in those state bodies, NGOs, businesses where they continue their career.
- Dozens of experts, volunteers, specialists – all those who are not indifferent to the development of our republic are involved in the implementation of numerous projects of the Association: and this includes harmonization of international and national relations, prioritized for the organization, and social, in culture, in education, in promoting a healthy lifestyle. The solemn part of the anniversary meeting ended with words of gratitude to them. 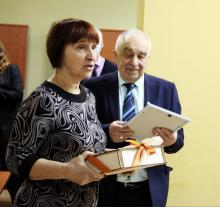 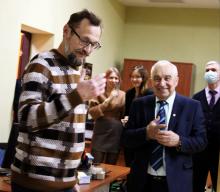